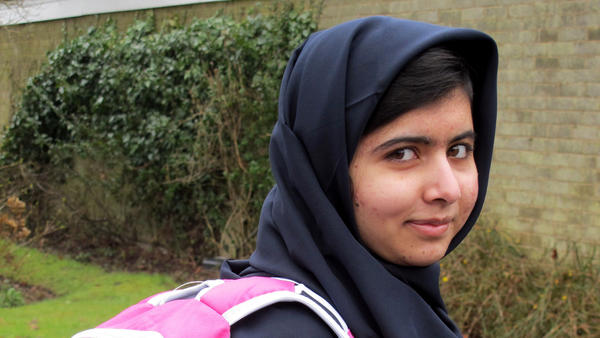 Just five months after she was shot in the head by the Taliban in Pakistan’s Swat Valley, apparently for defying a ban on girls’ education, Malala Yousafzai returned to school, this time in the safer confines of central England.

On her first day in Edgbaston High School for Girls in Birmingham, the teen, who has attracted international attention for her quiet defiance, issued a statement celebrating her accomplishment and expressing concern for others.

“I am excited that today I have achieved my dream of going back to school,” she said. “I want all girls in the world to have this basic opportunity. I miss my classmates from Pakistan very much but I am looking forward to meeting my teachers and making new friends here in Birmingham.”

The 15-year-old was placed into ninth grade, and school spokeswoman Annelle Rowlands said her first full day in class included lessons on home economics and a double math session.

Malala, wearing a dark head scarf and clutching her school case, told reporters as she walked to school with her father, Ziauddin Yousafzai, “I want to learn about politics and about social rights, about law, about how to bring change in this world and to work for the happiness and education of all girls.”

She said she was proud of her uniform. “It proves that I am a student.… I’m going to school. I’m learning,” Malala said.

The school’s headmistress, Ruth Weekes, told the BBC, “She wants to be a normal teenage girl and to have the support of other girls around.”

“Talking to her, I know that’s something she missed during her time in hospital.”

In October, she was flown for emergency treatment to the Queen Elizabeth Hospital in Birmingham after she was shot in the head on her school bus by Taliban gunmen targeting her in revenge for a blog she began at the age of 11. Relayed worldwide by the BBC, it mused on life as a schoolgirl banned from education under Taliban rule.

Surgeons removed a bullet from her head and inserted a titanium plate and a cochlear implant to restore her damaged hearing. Malala left the hospital last month.

Her family now lives in Birmingham, where her father has been appointed education attache at the Pakistani Consulate.